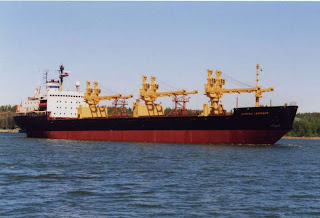 I'm not sure how to critically look at the quality of the ancient Russian-built hulks that I occasionally encounter. For the most part, they're horrible to behold, and also horrible to moor alongside and fuel, too. Whether this is the result of design, the level of care, or the amazing age of these rustbuckets is debatable... or, more accurately, which factors contribute most to the awfulness is where the debate lies, I suppose. It's sort of a sliding scale, contributory effect thing.

One thing I will say is that Ivan hasn't tried to repackage limited steelworking ability as an asset, like some US companies. Some of you have seen Reinauer towing's so called 'facet tugs' (example seen here), I'm sure. 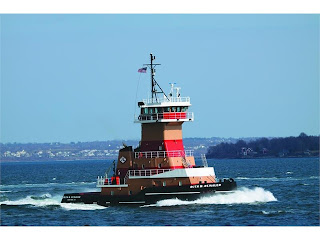 Reinauer is well known for having some high quality tonnage in their fleet, and I'm sure that this tug is up to par. That being said, there's little difference between the construction methods used to build this way and to build this way: 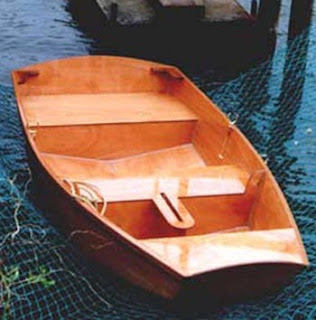 Photo courtesy of BATEAU.COM. And if you want one of these little beauties, I can build one to your spec for about $600
When you don't have the ability, or don't want to pay to have the ability to bend steel into complex shapes, you build a hard-chine boat with angles instead of curves- that is, rather than bend steel to conform to turns in the bilge and at the stern, for example, non-trip chines can be built (multi-angled hull shapes conforming to something almost, but not really like a traditional hull shape) at half the price. Example above- look at the hull of the boat, which is triangular under the waterline. Much easier to build than to frame-and-plank it in traditional form:

Photo courtesy of Arch Davis Designs. And I can build you one of these, too, for about $4000.

And so it went with the aged ship I worked on last night.

Now, when you move from the traditional wineglass-shaped hull to an angular approximation, you change the stresses on the hull considerably. One interesting aspect of this is that the shell plating of the hull becomes part of the structural design- in traditional boatbuilding, the framing takes up the stresses and distributes them; in this stressed-skin design, the 'hard points' (joins in the welds and angles in the hull) distribute stresses linearly, creating a laminar (linear layers of similar value) focused effect of stress distribution, rather than a generalized distribution that is proportional to the distance from the focal point of stress.
Anyhow, if that's getting too technical, imagine hitting a 2x4 with a guillotine with 500lbs behind the blade. Regardless of how you support the 2x4, it's getting split. Now, imagine running over a 2x4 with a Harley Davidson. So long as it's supported properly, no problem. Distribution and focus of stresses are important.
Now, these effects are predictable and well-studied. It's perfectly possible to build a ship using these techniques, and to expect it to last! That's one reason why I like building small boats using stitch-and-glue over removable frames- stressed-skin hard chined boats are durable and solid, if not so perfectly rugged as a traditional design. And, in the case of the Reinauer tugs, I don't know how much bending and flexing the hull does, compared to a ship. I suspect that the tugs are overbuilt like crazy to deal with the shocks and hits that seem to be part and parcel of the business.

Now, one final thought about the Russian ship before I wander completely afield: This was a 40+ year old bulker, in an era where 30 year old ships are extremely suspect. The Ivans certainly did some things right, design-wise. Putting the bunker connection on the centerline was NOT one of those things, nor was the access tunnel- the 24-inch circular, 3-foot deep hole in the superstructure through which the unhappy crew had to snake my 100-foot long heavy bunker hose by hand to meet their connection.
Oh, and the ship had an icebreaker bow. I never actually saw one of those before. No bulbous bow, and it looked like the anti-torpedo-plating of a WWII battleship. The panting (standing-out of the framing under the steel plating) on the superstructure was so prominent that the wheelhouse looked like a nude photo of an anorexic girl's ribcage, but the hull, especially at the bow, was stunningly fair. Everything that was NOT the hull was falling apart.
Posted by Paul, Dammit! at 3:33 PM