Yesterday, as always, some funny talking joker with a Mid-Atlantic non-accent goofed on the way I talk. Now, I'll admit that I've got a very, very heavy Boston accent, but that's not a bad thing, in my eyes. Yesterday, however, I was punchy as hell. Three days running on just a few hours of sleep is what did me in. I calculate that I got 7 hours of sleep in three full days, which is enough to survive, but not, obviously, to thrive. Since my name has not been on the paperwork that accompanies the fuel transfers that I have been assisting with, it's all legal, but still, I was beat.

I'm not sure which was better, yesterday, the 8 hours of sleep, or the 6 hours of movie watching and lying about... either way, I am feeling much better.

Some other things happened. Yesterday was my first anniversary as husband to Inappropriately Hot Foreign Wife. Since I am wicked smaht on days when I get to sleep more than 45 minutes, I arranged for us to celebrate before I left for work on Wednesday last, which is also part of the reason why I have been incommunicado with anyone but my family when I was home last week. On that front, it was a crazy, harried vacation, too. My increased pay rate at this new job allowed me to do something very, very wonderful for Inappropriately Hot Foreign Wife. I was able to put the money together for her to go visit her family back in Brazil. So, in just a day or so, she'll be seeing her mother for the first time in NINE years.
You can imagine that I'll be dining out on this anniversary present for a while. How the hell do I top that one, though? I have 364 days to figure it out.

She was all smiles, though, which was absolutely worth it. 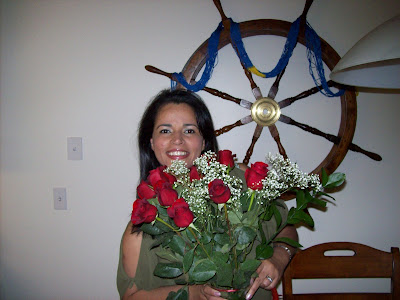 The flowers are my backup- on the day itself, when I'm not there, a little insurance to remember me by.

The Boy, who is also travelling with my wife, discovered my half-face respirator, and has since comandeered the same. How the hell he figured out how to screw on the cartriges is another matter. The kid's smart. 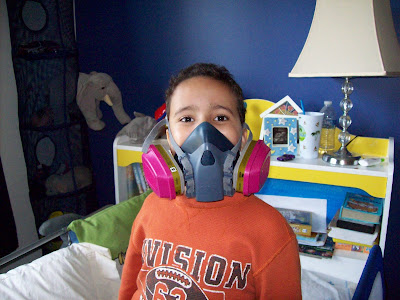 Finally, my being exhausted meant that I missed the opportunity to work on a bunker job that would have seen me tie up alongside my home away from home, the tanker NEW RIVER, where I have spent 8+ months a year for the past five years. My currently assigned barge had the job, but I was lured to bed by the siren call of 8 hours of being left the hell alone. I called the captain and said hi... I'm actually a little homesick for that dusty old ship. 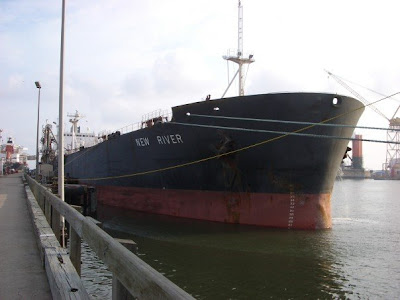