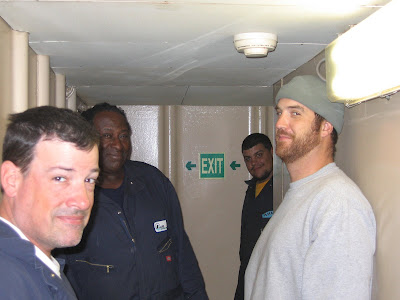 I was looking at some old photos from my ship this morning, when I stumbled across this one.

I took this picture a few years ago. The guys in the pic are all my friends. On this voyage, these were my co-workers (Manny, the black guy, is one of my closest shipboard friends, and also my immediate supervisor).

The setting is the port side after athwartship passageway on the mess deck. The weather looked like this outside: 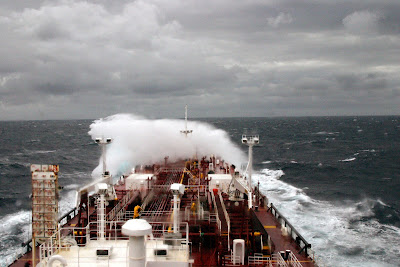 With the seas washing across the deck at knee to waist height, and so much flying spray, there isn't anything to be done out on deck other than lashing down anything that might threaten to work free. After a short while, with boredom threatening, we look for indoor jobs.

On this particular day, we decided to tear up the tiling on deck and lay down a new tile floor.
The old tile floor, being 45+ years old, was nas-t, and lumpy. Tearing it up with sledgehammers and crowbars was dirty and difficult on the back... thus the scruffy looking people in the top photo.
Now, if you look on the left side of the top photo, you'll see the odd corrugations in the wall- these extend all the way to the floor, so you can imagine that the tiling required a lot of custom cuts to make everything fit. To do that, we had Brad, shown here: 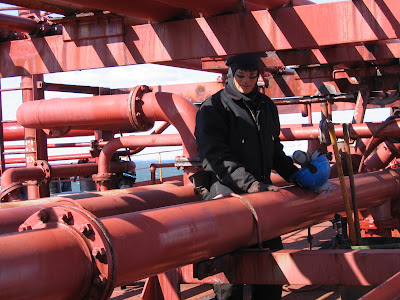 Brad is a classic old-school sailor: a little crazy, very clever with his hands, and with a background in another industry... carpentry, in his case. (FYI, I took this picture with a disposable camera that had no flash- totally mechanical- no danger of explosion)

Brad was our custom cut guy. He sat on a milk crate, and with him he had a laptop blaring bad european techno versions of classic rock songs. Brad's job was to cut and fit all the tiles that required odd cuts with a razor to fit in place.

After half a day of of working on our hands and knees, we all took a break, amid much groaning and stretching. I took the opportunity to snap that picture of the other guys. We were all working together and bullshitting, and it was a day full of laughs- it's rare to get five guys working together who got along so perfectly well as this crew. Outside of Brad, who is also a nice guy, we spent almost every night hanging out after hours, too.

Anyhow, right after I took that pic, we decided to check on Brad, who was in another passageway. The passageways on that deck form a square, and we split up to go check on Brad, so when we found him, two of us were in front, and two were behind him. Well, he was working away to the sounds of the most horrific assaults on the ears, ever: a techno version of 'Sweet Caroline.'
I don't know how it happened, but the planets came into alignment, and without even looking at each other, and without any planning, we all burst into our best attempt at Eurotrash rave dance steps- you know, pretending like we had lightsticks in between our fingers, stupid intertwining hands flying, all that dumb shit. We surrounded poor Brad at a distance of about a foot, who, with his butt on a milkcrate, had four crotches in his face, and hands and feet flying, we all busted a move briefly, then fell around him laughing like idiots before heading back to our work area.
Brad looked mystified and disturbed, and why not? No hetero man likes having five swinging steaks within inches of his head.
Anyhow, such was the tenor of our days. You can imagine that our superiors were happy to have the seas subside and get us out of eyeshot.
Posted by Paul, Dammit! at 7:05 AM

nice to see you still blogging about the seas.

A bit hard the imagine the same working atmosphere in a cubicle office. :)