On hands, and not being creative

I don't think I have all that much creativity inside me.

I'm a linear thinker. I'm pretty decent at organization and problem-solving, neither of which require creativity. I'm pretty good at making some things in fiberglass, or covering them in fiberglass and refining and shaping the surfaces after. Still not creative, though. I write, here and elsewhere, and am far more comfortable with technical writing; reducing complex things into a series of stepped statements that build off each other. Again, organization, not creativity. When I get off the reservation and write freely on ephemera, a sort of journeyman-quality of writing appears if I take the time to do it right... but it doesn't come easy. I suspect that it comes a lot harder for me than it does for the creative author crowd I interact with online- pro writers like Cedar Sanderson, Sarah Hoyt, Peter Grant and Michael Z. Williamson, who bust their chops and produce... well I know it's never actually easy, but I can't imagine that they spend as much time staring at a screen and picking their nose as I do, screaming inside because they can't articulate their thoughts fast enough before they're gone.

So, with my shop projects, I've consciously been trying to develop myself a bit, and improve myself on several levels. With my conscious effort this year to spend more time at home with my family, and less at sea, I've had a lot more time to mess about.

I've mentioned before that I have issues with my hands. I always have. I found it impossible to print or write neatly as a kid. I didn't, and don't, have the ability to describe smooth curves using my hands. Grasping a pen or pencil was never very comfortable for me. As such, I can't draw or write well. I have a lot of trouble being understood when I leave a note.

Ironically, I have a zone of VERY fine motor control, however. I can thread a needle without effort, and I was a machine when it came to dissection as a biologist. Despite not being able to take notes with a pen and paper, I found it easy to do things others did not, like being able to slice a section of fetal calf aorta (think of a cheerio-sized donut with the texture of pasta, about 1mm thick), then half it like a sliced pie, flatten it like a sheet of paper, then cut it freehand through the middle with a scalpel into two 0.5mm leaves- imagine sawing a piece of 8x11 notebook paper in half so you have two very thin 8x11 pieces... I could do that, and did, to clone fetal calf aorta cells.


I could do those things, but I can't draw a smiley face without it looking like a half-cooked shrinky dink.

See, technically, I can write... but that's not creative writing. I'm just putting down a recipe.

Building model ships has been good for my manual dexterity. I've noticed significant increases in my ability to hold and use a pen before cramping and pain make it impossible to continue. I can write 2-3 sentences now, where before a single sentence was pretty painful.  As a kid, printing and writing wasn't painful, I was just bad at it. An accident when I was a teen severed the nerves, tendons and muscle of several of the fingers on my right hand, so that didn't help.  My deep and abiding love of the ocean, coupled with spending much of my spare time on a lobster boat from age 8 to 33, despite my having developed exposure-based skin allergy to fish oil by age 10, left me with a chronic infection in my hands the entirety of my fishing career. My hands looked like an old man's, like birds's feet, much of my life, until I gave up fishing.  It took two years for the infection to go away, but along the way, tasks involving moderate movement, like writing, or playing music (I used to play bass until my mid-20's) became painful. Microfine movement is fine, however, which is nice, as is coarse movement, like swinging a hammer or sawing wood.

So, with my latest model ship proceeding nicely if slowly, I have been branching out into larger woodworking projects,and the challenge I set for myself was to learn how to deal with curves, which has been difficult at best, and still make them decent-looking without spending days sanding and fixing boo-boos.  Since I have much love for the appearance of wood, but without the skills and experience to translate thought to deed, I wanted to make something simple but curvy where I couldn't fall back on fixing my mistakes with sanding- if you make two surfaces mate on a curve, it's not possible to sand  (and take away) surface, and still make it match, at least not with the level of aggressive sanding usually required by my unskilled ass...  But I can problem-solve pretty well, and figuring out how to make something curved in shape despite my lack of skill represents a noble challenge to me. So since I had a fair amount of low-quality maple and walnut wood, and some decent quality stuff too,  I made a charcuterie board, something out of Dr. Seuss's kitchen. 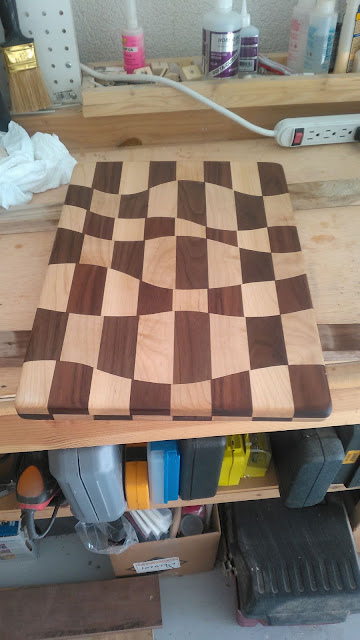 These are just 1x2 sticks of walnut and maple, jointed and cut, and glued and recut, then routed with a rounding-over bit. The curves are deceptively simple, and even my monkey ass got them pretty well right. Hell with it, it looks nice. I finished it by melting beeswax and mixing in mineral oil in a saucepan, then rubbed it in and buffed it.

This may well be the first ever creative thing I've actually done. I mean, jointing and gluing is day1 shit for apprentice woodworkers, and while this is better than I thought I could do, it's not exactly groundbreaking. Still, I'm happy with having done something decent for once without relying on plans or someone else's skills.

Do you have a problem eating fish? Or is it strictly a skin contact allergy? Did you have an infection that was piggybacking on the allergic reaction caused skin damage?

I've got an allergy to aspartame. Obvious reaction symptoms are akin ulcers around my fingers and toes. It could get really bad (leaving bloody fingerprints) before a nephew discovered he had the same problem, and was able to trace it to a recent change to diet sodas. Doctors never figured it out. Amazing how much of the food production is contaminated with that stuff. If a production facility uses it in a product, there is a very good chance it will show up in everything else they make.

I also have a general allergy to fish. Doc said it is an allergy to a protein (perhaps an enzyme?) contained in fish muscles. I think this turned up around age 8-10. Discovered that asking waiters in Asian restaurants if there is fish in a dish isn't good enough. Oyster sauce causes a reaction. Doesn't much resemble a fish! I just avoid consuming anything that lives in the ocean, to be on the safe side.
At least it doesn't seem to be associated with anaphylactic shock to any notable extent, especially considering the huge increase in the price of an Epi-Pen. I think they were $20 when I first got one around '03, but now they list around $600.

Will- it's contact dermatitis. Constant exposure led to sensitivity, which led to allergy. I can eat fish fine, but the fish oil (and now many oils) cause my skin to slough off, so the open cuts and sores got infected a lot. Plus, stuffing 1,000lbs of bait into 400 traps every day led to a lot of pricks with fish bones, so the little staph infections around cuts worked their way deeper and eventually became persistant cellulitis and hung out between the bones, too.

I completely sympathize about the leaving bloody fingerprints part. Been there, too.
How often do you have flareups even with being cautious? I lose all the callus on my hands whenever I touch fish or certain types of oil (kerosene and diesel), but I haven't had an infection in my hands since I got over the fishing-related stuff.

Thats beautiful work. I bet your wife will love it.