A Review of 'Primordial Threat' by M.A. Rothman 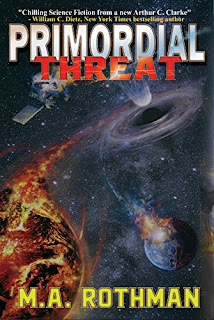 For a merchant mariner, a really enjoyable book is dangerous- you end up staying up too late reading it on your off-watch time, and end up tired on the next watch… and then you do it again!
It’s our equivalent of reading under a blanket with a flashlight when you were a kid.

From what I gathered online, Mike Rothman has a strong professional science background, and a good sense of humor. He shares little vignettes about being a husband and father that can get a laugh out of anyone who’s in the same shoes.  I was lucky enough to score an advance copy.

Primordial Threat is classic hard science fiction. By classic I mean that it takes place in the near future (the moon has a small manned colony and there are asteroid mining crews making a living in the solar system near earth), and science and technology play a central supporting role in what is primarily a story about people.  It hits on some of the foundational themes you might find in many sci-fi books and films, and puts an original twist on them. This is NOT a a story about thin and handsome WASPS with great hair flying around space, fighting aliens that look just like us but with fucked up foreheads. This story isn’t about the wonders of diversity; the characters are created for content, not for color, but whose color in fact flavors the story to good effect.

Recently promoted, Burt Radcliffe is trying to get settled into his job as administrator of one of NASA's programs after increased asteroid activity is noticed far out in our solar system, moving inward.

With earth threatened by asteroid impacts and behind that, a wandering  primordial black hole (which is a thing!), Dr. David Holmes, the one scientist who foresaw the threat (and had his career destroyed as a result) and later disappeared, a search ensues, and this is where the book starts to  shine- it’s not just space and big guns, but a cop procedural, a military thriller, a disaster story, and a mystery, all wrapped around near-future tech. A shadowy death cult with global reach begins to ramp up a campaign to ensure the Armageddon that will (in their eyes) rain death and judgement on all of humanity, but even there, the scale and scope of the cult is realistic. No standing armies, but terror cells.
The fact that Dave Holmes found a new career that roughened him up around the edges, coarsened his language and put 40lbs of muscle on him also rang true with me. I know a little bit about that.

Rothman’s writing style is clear and crisp, for the most part, although the backstories of the characters feel a bit shoehorned at the beginning of the book. The action is well-paced and fun, and the obvious dark dread of characters facing the end of the world and trying to do something about it (and often failing in the stepwise progression towards goals) is realistic without being overwhelming. The heroes are all over the board- a NYPD officer, a brilliant Indian lady who is difficult to get along with, a space agency administrator, and Dr. Holmes himself, a disgraced former science agency head who has a target painted on his back because he might be able to save the world.

The use of tech is a central part of the story without taking away from the characters. From the evolution of Reagan’s SDI, materials science, the agonizing slow development of nuclear fusion and the true apex of all science fiction, chasing the dream of relativistic space travel.  The end goal is something beyond what anyone would imagine- not space ships, but a project beyond a scale that is easily imagined, but which scientifically remains possible.

It’s all in here, and all play a supportive role of what is, in the end, an accounting of the cost of a generational leap in humanity’s future. And it's a lot of fun to read, too.


PRIMORDIAL THREAT will be released online August 31
Posted by Paul, Dammit! at 5:41 PM