This Week In Shipping, or Everything Is Awful Again

Well... quite a week we're having.

As Peter noted in a great summary about shipping woes this week, Things are looking grim for consumers.  After a couple of years of shockingly low freight rates, bankruptcies, accelerated ship scrapping, an insane and poorly-planned out drastic tightening of global marine fuel environmental regulations, the virtual elimination of competition between mega-corporations and then Covid-19, the shipping industry appeared to look like this: 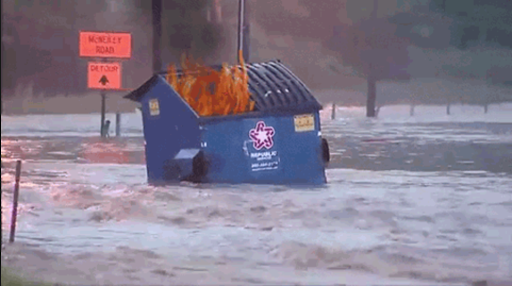 But, it's worse than that. Oh, the shipping mega companies are doing well, thank you. Record profits for the largest of them.

If you looked at the article above, Peter points out correctly that we're going to feel the squeeze as transport costs get passed to consumers.  This will happen, and is beyond my ability to competently discuss, so I'll leave that be.  I'm more curious about the muddied waters in the trade at the moment. A freight forwarder who wished to remain anonymous noted that the explosion in freight rates the past few weeks is 'largely academic' as there are no more actual spaces left on transpacific shipping for at least the next month.

This is pissing off some folks, for sure. Shippers aren't just not taking orders while there's a backlog. Prices continue to rise after a reservation is made. At the point of sale, you pay 'index price,' or whatever the shipper is charging at that moment. However, before your box gets in the queue, you pay any fees levied between having made your reservation and the time of shipping, and some of these, like 'priority fees' that guarantee your box will be on the boat in a timely manner, can be quite steep, in the thousands.

It's just as bad for Europe, if not worse. The Loadstar, a trade publication, has recorded that the most recent data indicates less than 10% of ships are arriving on time to Europe. Despite this, there have been a great deal of cancelled trips, as shippers try to get their ships onto some sort of schedule again, despite delays at load and discharge ports because of congestion.

And that brings us to congestion as an issue. Mega-terminals such as the one that I work to service, are operating at 100% capacity for extended periods to deal with the insane spike in imports. The shift to larger and larger ships means that, like rush-hour traffic, congestion is an issue even when ports are operating below capacity. I'm watching AIS tracking sites to see where our ships are, as it's not unusual for us to rush rush rush to load a cargo, fussing at the terminal operators to hurry up and fill us up so we can get oil to a ship that is only in port for so many hours and needs fuel, only to learn on topping off our own tanks that they've dropped anchor and will be coming in tomorrow instead... container ships lose MILLIONS by being a day late to port.

Another interesting nightmare is that it is getting increasingly difficult to ship stuff to Asia. No, really, shipping companies used to HATE having to ship mostly empty containers across an ocean. They don't make money doing that... but demand for containers is so high at the moment that empty containers are taking priority in loading for export from the US, over, say, actual cargo.

It's an odd thing to see, a completely full containership, boxes stacked to the sky, riding high enough out of the water that the prop wash is full of foam from the ships's wheel being so close to the surface, like it would when the ship is in ballast.

When your container isn't loaded on the ship it was supposed to be loaded on, this is called being 'rolled.'  Rollover rates are presently a record-shattering 30-50% which says something about the present moment, certainly. In our era of 'just-in-time' inventories, this also means that suppliers have to beef up inventories earlier than in past years, and with at least one shipper noting that they've already sold 80% of their container spots for this year globally, it implies that the chaos will continue at least in the short-term. I suppose that in 2021 there is less focus on long-term, given how unstable things are.

Now, a word: I am NOT a logistics person and NOT an industry expert. I am the maritime equivalent of the guy at the rest-stop gas station on the Jersey Turnpike who sullenly puts $15 in 87 in your tank. Except that I also fetch the truck that carries gas to the stat.. you know what, that's not a great metaphor, but you get the idea...but I make my living off of these ships that come to call, and when the industry is a mess, eventually that trickles down into my little oasis of sanity and rationality here aboard the HQ, such as it is.