I've been back aboard for a little over a week now. Back in the groove I guess. My time home was wonderful. Coming back was less so, but I'm not yet enough of an asshole to get paid to stay home. Gotta work on that.

It's been an odd mix of off-hire time and balls to the wall running around. We had Christmas day off, and that was great- we ate like kings, as I had shopped specifically for all the fixins while grubbing up for my first 2 weeks aboard anyhow. So Christmas and Boxing day, which was also free for us, were notable for the massive and satisfying meals. Big E, our new partner on here, had bought a turkey, and B had made a tray of cornbread dressing for us before he went home on the 23rd.

Actually, I have to say that I had the Christmas Spirit this year. 2020 was a pretty tough time for so many people, I am deeply blessed to have had less struggle than most, and self-aware enough to be greatly appreciative for it. With such a poorly-timed crew change as Dec 23rd, I was predisposed to be grumpy, seeing as I got snowed out and missed Christmas through bad luck last year and it'll be 2022 before I get another chance... but Sunday  the 20th, Inappropriately Hot Foreign Wife and I made a giant dinner, and my brother, sister and nephew came over, and we exchanged presents. It was truly a great day. I cooked a prime rib for only the second time, and holy cow it came out perfect. I was fit to burst with pride.

I mentioned before that Inappropriately Hot Foreign Wife bought me a monster bandsaw that prompted me to actually lay out a real shop space in my garage shop. So that's on for the next few months. But I won Christmas this this year for sure. Not only did I get an amazing present, I gave an amazing present. 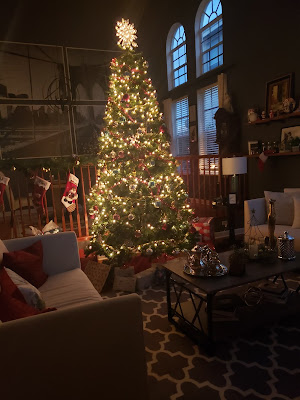 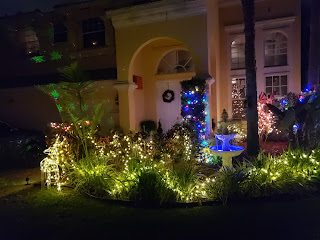 Inappropriately Hot Foreign Wife is somewhat vain, being, well, inappropriately hot in that South American latina sort of way. Back in October I commissioned a portrait of her to be done in oil on canvas, based off of a couple of photos I sent to the artist. It was a gamble- although his work was amazing, I was afraid it'd be cartoony or not capture the light in her eyes and animated persona... and my wife's her own worst critic when it comes to her looks. I got my son involved in November, when the first proof came back, and we conspired to make a few minor changes, and those made all the difference. After my siblings and nephew went home, we opened presents under the tree, and I was as nervous as a one-armed paperhanger when she opened the box and saw the framed portrait. No need. She was absolutely floored. Huge, shocked smile, and then she burst into tears. Happy tears, mind. I've never seen my wife cry out of happiness, and I think that moment was something I'll remember forever. So, good memories this Christmas.

Christmas night, after dinner but before presents, we hung out in my back yard, as it was a pleasant night about 70 degrees.  Still a novelty for me, as a transplant from the north, but fun. I had fired up the jacuzzi in my back yard, and we hung out in there for a bit, which for my poor brother, who has spinal damage and fairly constant pain, was a present in itself. It was a good way to let dinner digest.

So, after an amazing if not relaxing time home (I stressed over getting the lights up, the presents, being a good host, etc. Lol. Ass.), I find myself back to work, and among other things, undoing the holiday weight gain. Back to eating healthy since the 27th. I'm in what I hope is the tail end of the carb flu period, where I've had no energy for the last 2 days, and hopefully some time today or maybe tomorrow I'll feel better. The heavy feeling in my guts has almost passed. I attribute that to burning off what was probably 3-4lbs of glycogen in my liver as well as whatever ghosts of excess were in my guts too. Either way, I'm feeling less logy... which is a good thing.

The last few days were crazy busy. We went from sitting around for a couple of days to running at full speed, and with a complex series of segregated cargoes... 3 fuels blended from 4 shoreside tanks, each proportioned differently into 2 parcels each in 2 of my tanks, for a total of 4 tanks aboard, and two wildly varying-sized tanks at that, my smallest and largest paired, which had to get the exact same proportion of the 3 types of fuel in each tank. I killed a couple of trees working out the blends. In tankerman language, we had two segregated triple-barge blends of Ultra Low Sulfur Fuel oil, from four shore tanks... and then in the same load we also had a large parcel of Very Low Sulfur Fuel Oil, and also a couple hundred tons of Low-Sulfur Marine Gas-Oil, which got segregated into my dedicated VLSFO and MGO-LS tanks, as well.

The HQ 3 point-something being what it is, we were able to fit everything on board, with most of the tanks being only partially-filled in fact, but given the odd mix of products, we sailed from the loading terminal with absolutely abominable trim and list. We were down by the head by two feet and had a modest port list. Luckily, one of the two segregated blended cargoes went to a ship that was only 3 miles from the loading dock, and the second ship only a short hop from that, a car carrier that took our VLSFO and MGO. This solved out list issue, but not the trim, being still down by the head. Then back to load more ULSFO at a different terminal, a tiny parcel that was blended from 2 shore tanks, and had to be put in just one of my cargo tanks. The first portion only put 18 inches in the my tank, but it was pumped aboard through a heated pipeline from the terminal, which I didn't expect, and came aboard at 150 degrees, scorching hot and belching so much steam that I was blind and the vapors were obnoxious enough that I wore a respirator. The shoreside staff had to handle metering the correct volume to me, which I hate to do. They aren't as anal as I am about accuracy. Luckily, the second, larger aliquot of fuel came in at ambient temp, and did away with the steam, and I got a good blend, but we came away from the dock with a ridiculous list from having filled that one tank. We pumped off that tank in short order, and then pumped off the last of the previously-blended ULSFO, which, ironically was the first parcel we had loaded 2 days before.

Of course, the last job went hard for us. The ship's crew was... well, retarded, and made for a trying time. I have to credit the 3rd party surveyor they hired for unfucking much of the process, which isn't his job, but between the engineer who was practically eating the microphone of the handheld VHF I gave him to handle comms (seriously, it came back with the hand mic leaking saliva out of the plastic grate) and sounding indecipherable, like Charlie Brown's teacher, and his helpers who didn't know how to run their bunker crane or how to operate the accomodation ladder, and who kept asking me to jockey the throttles on my pumps. Some days are like that, though, and we got the cargo off and away from the ship in time, and there, gloriously, to a lay berth just across the street from the Newark airport, where at the moment we are expected to have New Year's eve off.

Well, I'm happy to see the ass end of 2020, and I hope I and everyone else have a better 2021. Hopefully there isn't a civil war before first of spring.