A moral compass pointing due south

I've got to brag up my wife here.

I'm still at home. Christmas dinner is tomorrow (Sunday) and I'll be heading back to work a few days before Christmas, so we're putting the dog on with the southern part of the B family.

Although my wife is an evangelical whereas I am a cradle Catholic, we're both disgusted with the administration of our respective churches, and have pledged not to tithe or give one single red cent until the corrupt bastards in both groups get their shit right.

So I discovered today that my wife in conjunction with a good-hearted relative back in the old country gave a bunch of money to an orphanage in Brazil last week, to buy shoes, clothes and a little present for every single kid there. Money that normally would have gone half and half towards paying for the legal defense of child predators, or a nice new jet for the already-wealthy suits selling salvation, instead went to people who actually needed it. I was near fit to burst with pride when she let the cat out of the bag.

The picture of those kids... Jesus, that in the past I wasted that money and gave it to the bloated Perfumed Princes of Rome. At least this year it went to the right place. 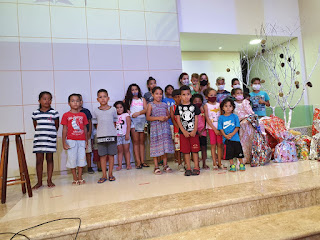 We're in the same place. No local church rates tithe at this point, so we roll with disaster relief or charity we consider worthy and know the beneficiary of.

Jesus was pretty adamant about caring for widows and orphans. Hats off to your family.