Over the weekend, the chemical ship "Stolt Groenland" suffered a massive explosion in the port of Ulsan, Korea. 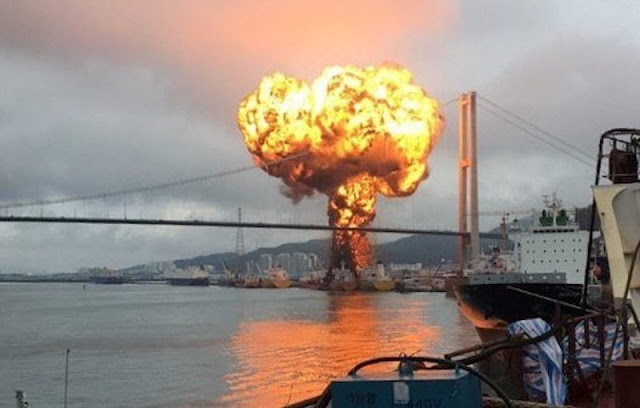 Yeah, that's no joke, and amazingly, despite 10 injuries, mostly among the terminal staff, nobody was killed! Very lucky there. Less lucky was the ship next to it, the "Bow Dalien" who suffered as a result.

It's believed that the Stolt Groenland was carrying styrene, which may be the cargo that blew up.


Both Stolt Carriers and Odfjell Seachem, the owners of these vessels, have lost ships to explosions in the past. There's a certain amount of fatalism in dealing with casualties in the chemical trade. In speaking of this disaster with the dockman at a local fuel terminal that also tends to chemical ships, the man's response was along the lines of 'Well, that's what chemical ships do; they explode.'
There's some interesting video at the following link. I've got a shitty signal connection today so I can't embed better video here, because I am in New York, and it's apparently a savage wasteland where 4g is taboo.


The first video shown is from the perspective of the crew of the Bow Dalian, who were abandoning ship, a reasonable reaction to having the ship  next to you blow up, when you're on a godamned floating bomb yourself.

I remember the "Bow Mariner" incident off of Virginia about 15 years ago. I was in the Gulf of Mexico at the time working.  That one was deeply upsetting to me because I was just learning tanker operations like tank cleaning, improper performance of which caused that particular ship to explode.

The cause of the Stolt Groenland explosion is as yet unknown.  Styrene is extremely volatile, and accidents have happened before.
Posted by Paul, Dammit! at 3:50 AM