I hate it when mommy and daddy fight

There's been quite a fuss kicked up among American mariners over what's going on with the MATSONIA. 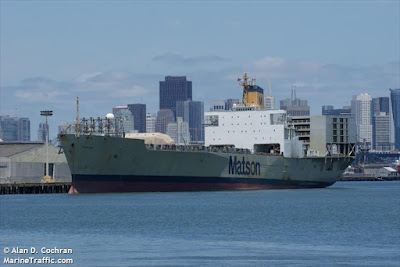 A couple of weeks ago, a sistership to the ill-fated El Faro, Matson Navigation‘s 760’, 1,727-TEU Matsonia, developed a crack in her hull while docked in Oakland, Calif., after arriving from Hawaii on her regular run. These things happen of course and the vessel’s crew, the Coast Guard and port response teams quickly contained the resulting oil spill. Except for news reports on the incident in trade publications and websites, the incident was largely ignored, but what it portends has far-reaching implications.
After the El Faro sank in 2015, taking with it 33 souls to the bottom, some discussion followed as to why a 40-year-old ship with a history of structural and mechanical problems was still in service (the industry considers 20 years to be the expected service life of a vessel of this size and type). But the National Transportation Safety Board glossed over the political implications in the tragedy, so they remain today. That’s why the Matsonia’s hull crack is significant.
The Matsonia is 46 years old

Now, if that picture above looks familiar to you because you're a mariner, it should. She's a sister to the El Faro, the antique ship that sank and killed 33 mariners a couple of years ago.

There's no shortage of historical record to parse to see where there is a long tradition of sending unseaworthy rotten ships to sea until they sink. It happens all the time all over the world, and in fact this was a motivator for the speculation market that formed in Lloyd's Coffee House in London in the days of British sail, eventually becoming the largest and most famous insurer in the world.

I've had a chance to correspond with Max Hardberger, the author of the article above, on a couple of occasions. He helped me run down an out-of-print copy of one of his early books, and I reviewed his last book here, a few years ago. I had inquired after asking to join Vessex, his maritime repo company that specializes in repossessing ships illegally seized in third world ports. It never panned out, me being somewhat allergic to spending time in a foreign jail, which pretty much is guaranteed should an extraction go south. The author is one of the few Americans I know of who sought foreign licensure and worked as master on foreign-flag ships.
Old ships sink. Plenty of old ships don't make it to the beaches of India for scrapping. The Caribbean is just rotten with smaller sunken ships, ancient rickety European coastal freighters that survived the ocean crossing to spend their last few years working in places like Haiti, Dominica and Honduras, and even visiting Miami and the US Gulf if they're not too bad.
However, a 150' 70-year old shitbox supplying Haiti with bundles of rags and cardboard is a far cry from a 760-foot container ship that runs between L.A. and Hawaii.  Now, Matson IS replacing their ships, slowly, as they can, which is a good thing. And ABS and Uncle Sugar's Coast Toasties both say their floating relics are safe enough... which, to be fair, they also said of the El Faro and the Marine Electric, the last two Jones Act ships to sink, so take that with a grain of salt, I suppose.  Today, just like in the days of the Coffin Ships mariners must still walk on a ship with the knowledge that they are still the final arbiter as to whether or not a ship is safe enough to be worth working on.

Now, here's where I stand: The fact that we've spent a century plus and untold billions on maritime safety doesn't abrogate from us as individual mariners the need to be willing to make the hard call of walking off a ship that makes us afraid. But here's the sand in this can of Vaseline: The brass balls it takes to do so, coupled with institutional discouragement from doing so, makes saying something, or worse, doing something, akin to a subversive act. It absolutely can be a career-ending one.
For all the talk of safety between employer and crew, and it doesn't matter whether you're talking about a foul European investment bank providing slave wages on an unseaworthy bulker run by third world crews, or a goddamn brand new Aegis cruiser, the more expensive a safety issue is, the harder it is for a shipowner to listen to concerns about it.
Huh, that should be an iron law.
Think I'm exaggerating?  Look at Captain John Loftus, one of the seniormost captains in the Jones Act Trade.

Look at the B-255 hearings, where after an explosion and two fatalities, there were allegations that one of the largest Jones Act employers discouraged safety reporting.

He felt his job was threatened by Bouchard vice president Kevin Donohue after reporting problems with the barge to Bouchard.

Jackson claimed Donohue told him that reporting the problems had been “a mistake,” implying he could lose his job

... Unfortunately, there are multiple roadblocks to even discussing this subject among mariners.
It was interesting to me, on Facebook when the whole discussion of the MATSONIA's age and condition started, the largest bloc of comments were along the lines of 'shut up.'   Not exactly constructive. There are so few Jones Act ships, that many American mariners are more afraid of losing jobs than losing lives. Granted, it's easy to be a hardo online, but for my part, I wouldn't want to be in the shoes of the men who send rotten hulls to sea and then have to look in the mirror  after some poor bastards eat it... and granted, also, that most of the loudest voices are never and will never be in that position. However, whether one has a dog in this fight or not, it seems reasonable to question just what the end-game is here. There's a certain amount of fatalism in play. In speaking with my co-workers, many migrated to my current employer because they were forced out of other companies, one of the two companies discussed here,  in most cases, because of miserable working conditions, and the safety culture is ALWAYS discussed in that. The fatalism in question is that there is no expectation of improvement in the future. There's a perception, I find, that there's a lot of back room handshaking among the right people at the right table at the Propeller Club or the AWO between the folks who handle oversight and the folks having their equipment overseen. From the standpoint of looking at progress, this is not a particularly outlandish thought.  The B-255 was not that company's first barge to blow the fuck up and kill people.
I can't help but be angry that it happened at all. The fatalism strikes me, too. I write and speak off-the-cuff, irreverently, certainly, and to a point that is the tone I try to set here- a little sarcastic, a little acerbic, and only semi-organized. I can do that because Paul B the blogger and Paul B the employee are two different people, but both have a decent job that maybe doesn't pay as much as it might, but does have awesome shoreside support with no BS and no shortcuts. As such, they give me a safe place to make almost enough money to get by, and I like to make them look good in return, and even though I often enough run my mouth way too much here, where the metal meets the meat, on board, I don't do that. There's mutual support.  I don't see the companies noted above having that sort of relationship with their help, and it shows.

Everybody dies but not everyone has a job...so I guess the question of "how important is this job to me" is a real personal question.

Good post Paul, the only thing is in many cases a mariner can judge a bad situation. But sometimes not. Nassim Nicholas Taleb uses an analogy in the book The Black Swan of a turkey that every day becomes more confident that the farmer is his friend and means him well. Till Thanksgiving day.

I used to cross the Gulf of Alaska on a small ship built in the the forties. Every time we crashed into a head sea and came out OK increased our confidence we were on a strong little ship.


Same thing with the El Faro, ship had been in a lot of weather, captain had high confidence.

Fine post, thanks for sharing. Didn't know anything about that subject at all.

Paul, B....If you haven't already, check out this guy's posts. https://frumped.org/2019/03/16/jacksonville-coast-guard-sector-delays-action-against-company-now-commanded-by-jacksonville-sectors-former-commander/ Seems to know his stuff.