The national news and the local news all agreed on one thing. This was the end, apparently. Snow-Ragnarok. Da Bomb Cyclone, yo.

In New England terms, this was a right decent Nor'easter. Maybe a 10-year storm, in fact, although the unfortunate time of tides in  many places has led to some pretty strong flooding. Sucks.

The wind was pretty brutal. It's already peaked and is on the way down, as I type. The snow passed. Maybe a squall or two hanging out, but that's about it.

We bunkered the OLEANDER during the overnight, as I mentioned yesterday, and it went well. I had a phenomenal tugboat team to work with- a small push boat that my company uses for spot work when we run out of available tugs. All of their boat handlers are among the best in all of New York, which was good, as the job started with some extremely delicate maneuvering. 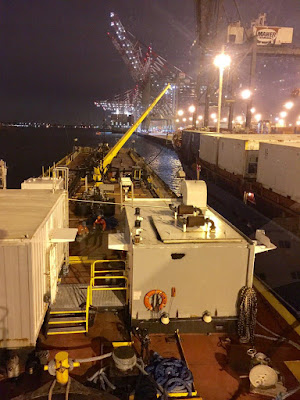 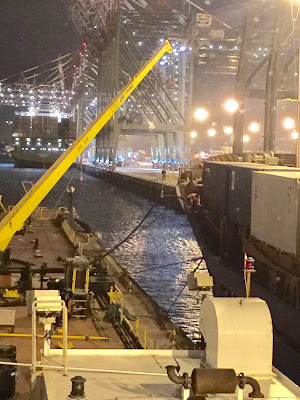 I chose to pump off the diesel first, as we arrived alongside the ship before the weather really set in, and if you see the big ass gap between my bow and his, the only thing keeping my deck from drifting under his taller bow was several very tightly bowsed hawsers securing my stern to his like a barnacle on a rock, but which are still fallible. I had to scoot so far forward in order for my diesel fueling hose to reach his diesel manifold underdeck in his fo'c'sle.

We timed it right. As the ships' crew was disconnecting the diesel hose, a few snowflakes came down, and a gust of wind came from our offshore side and made the hawsers on the stern groan. As we cast off lines and the tug delicately drifted a couple hundred feet back so we could connect our heavy fuel hose to the ship, the snow and wind started picking up. It only took about 10 minutes to get all fast, and within an hour we were pumping off to the ship, but by then the snow and wind had picked up considerably.
At watch change, later on, the wind was already screaming and a nasty swell cutting up in the outer harbor a few miles away. We had a small gap of time between this job and the next, so as I was getting ready to rack out, we lay to at the container dock, and by the time they were all fast, the wind was screaming and visibility was down under a quarter mile. The Coast Guard shut down travel at that point, so people were trying to get to their destinations, and our next job delayed until the ship we're to meet sails, maybe late tonight before midnight.

So that brings me snug and warm indoors for most of this watch. I made soup, and am about to go shovel snow for a bit before it turns to solid ice by the temps, which are apparently about to reach the low for the winter thus far. Tomorrow's prolly gonna suck but I've been talking and Fecesbooking with friends, and they're getting tossed around out in the harbor today, so overall I'm feeling lucky.