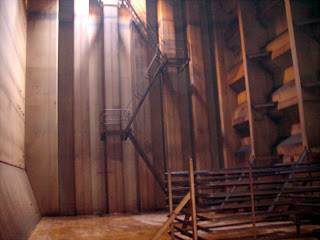 This is a smaller cargo tank on a smallish oil tanker.

When dealing in modest volumes of oil- parcels between 200 and 4,000 tons, in my case- there's a surprising amount of estimating and approximating going on regarding the actual volumes during the transfer of custody of the oil. In our era of $3.00 a gallon gasoline, tenths of gallons are precious to some people at your local gas station. In our world, a couple of tons of oil here and there isn't much to worry about. Imagine the money involved, where 5,000 or 10,000 gallons of missing (or extra) oil are the difference between 'good' and 'acceptable' volumes.

There are refiners that always short the barge or ship a minimum of 10 tons of oil. There are tank farm that always overpump 1-2 tons of oil to every barge, or 10-20 tons to every ship. This is the best some groups can do for accuracy.

Oil changes volume rapidly with changing temperature. The density of oil is measured at a standard 60 degrees, but oil is rarely 60 degrees. In fact, at 60 degrees, the Heavy and Intermediate Fuel Oils aren't fluid enough to be pumpable at all. They need to be between 100 and 140 degrees Fahrenheit in order to be pumped comfortably. At that temperature, the oil is much less dense- a volume correction factor must be applied- a multiplier (well multiplicand, really) that normalizes the value and gives one the number of net barrels that are being transferred, were the oil to be cooled to 60 degrees.
In dealing with these large volumes, the US is the only country in the world that still measures their tank depths in feet and inches. In order to make sense of our ancient and outmoded units of measurement, we apply another correction factor that equates barrels of oil (we don't use gallons- the number is too small, and oil is sold by barrel, not by gallon, for the most part) to metric tons of oil. So, when a ship requests 1,300 tons of heavy fuel oil, and 75 tons of LSMGO (Low Sulphur Marine Gas Oil, a type of clean diesel), we have to sit down with a pad of paper and a pen and play with numbers before sitting down with a keyboard and a program and playing with numbers.
Me being a pernicious ass most of the time, I have a nice program that takes the API density (a logarithm that describes the rate at which the oil volume will change with temperature) and the temperature, and give a correction factor out to 5 decimal places- that is, it will calculate to the hundred-thousandth of a barrel the density of the oil in question. In fact, the first beef I ever got in with Grumpy, my counterpart when I go home, was that he deleted my program in favor of a manual calculation that only gives us corrections out to FOUR decimal places. I can be a fastidious dick like that, but then again, .00001 barrels adds up when you're dealing with 30,000 barrels at a time. Well, OK, it doesn't really, because if the man on the shut down switch at the refinery is scratching his balls when I call for a shut down, and doesn't have his finger on the trigger (the shut down I mean), that half second turns into enough oil for me to get from Boston to Los Angeles and back in my truck.
Those oil tanks you see in tank farms at the side of a highway- in some of them, 1/16 of an inch is 7 tons of oil, and it's hard to read 1/16 of an inch from an oily gauge, so some guys round up or down to eigths of an inch, or about 15 tons plus or minus. In fact, the amount at which one's hands shake can change the reading by quite a bit. Being a caffeine aficionado, I lay my gauging tape against something to prevent the shaking hand effect. Not everyone does that, of course.

My view is that when you spend a half million bucks to fuel up your ship for a couple of weeks, you should be getting what you paid for. Little ships that run into shithole ports like Haiti and Rio Haina, or fruit ports in Brazil or Chile, those boats run on only 15 or 20 tons of fuel a day. "Only." Imagine. My little barge carries about 4,000 metric tons of oil, which weighs about the same as two WWII era destroyers. Things have gotten big. I guess when you're dealing with such a large scale, what's a couple of grand in oil between friends?
Posted by Paul, Dammit! at 3:04 AM