unauthorized visitor on board!

So we had a little scare the other night. Well, the deckhand on the tug did, anyhow.

We had an unexpected visitor. He landed directly on the deckhand when he dropped from the sky.

His name was not on the crew manifest.

When presented with the sign-in log, he took a big ol' shit on it.

Other than that, he was friendly, lonely, cold, and obviously lost.

So I had my picture taken with him. 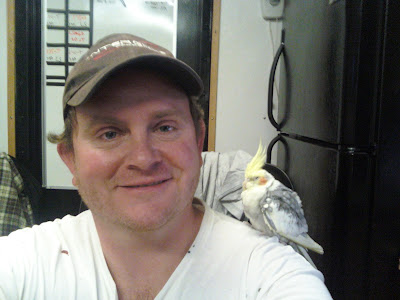 Now, I've owned parrots in the past.
That being said, this little cockatiel, who escaped from someone's home in NJ or Philly, was a people-phile. As soon as the deckhand gave him to me, the bird climbed to my shoulder and promptly fell asleep. He squealed when I picked him up to take him off my shoulder (this is the mark of a hand-fed bird- you can pick them up without the bird getting in a panic), and whistled quietly until he could climb back on my shoulder. When placed on a perch in the galley, the bird made a beeline for my shoulder again.

Ultimately, I would have been happy to keep the bird. I found him to be friendly and sociable, and quiet, as far as birds go... BUT, Grumpy Tankerman, my opposite, hates birds, and maybe everything else, too, but birds first. I couldn't subject myself to a week of bitchery, so the bird (named Ed Grimly for the short time we were together) went to stay with the engineer on the tug that was made up to us.

Reports since then are that the bird has made himself at home, preferring to sleep in the engineer's quarters, but residing mostly on people's shoulders during daylight. No surprise there.
Posted by Paul, Dammit! at 6:01 PM

cool! a runaway bird wanting to see if the myths about the watery life are true. next time you pull into a port, the UVP migyht test out the myth of rolicking shore leave.