I've been talking about the immigration debate with my wife. Since she spent plenty of time in a gray area, immigration wise, we've had some spirited discussions. In a way, I feel guilty about showing her the reasoning behind the opinions I hold, because every now and again, I change her opinion, and I have to see her falsely positive impression on US life die its' natural death.

Now, when we talked about Arizona, my wife found it hard to believe that someone could mistake her for a Mexican. She's South American. She was not amused when I told her that an Arizona cop wouldn't care. 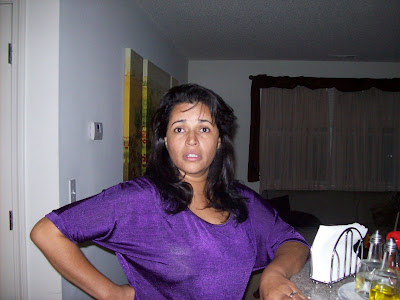 
At this point, she told me than in Brazil, people would assume that I was British, as I don't wear ugly, garish clothing like most Americans.
I responded calmly, of course. "Jesus, Mary and Joseph, don't say that in front of my parents!" My mom's family is from Cork City, and my dad's was from somewhere in county Mayo or maybe Sligo. He was orphaned at an early age. The Irish sea and 800 years away from England, anyhow, is my point.
Anyhow, one might think that my wife would be an Open Borders sort of person. Not true, in fact. She recognizes that while our economy depends to an extent on illegals for cheap labor, there has to be a limit to the influx, or the equation becomes unbalanced.

My own opinion is that I know some illegals, most of whom are here to work hard, and any hardship imposed by being an illegal immigrant in the US is better than the life that they could have back home. The American Dream lives on, in a twisted way.
I fear the loss of our individual freedoms. I can hardly believe that this is the same country that I spent my childhood in. Being half Ginger, I'll never have to worry about being mistaken for a Mexican, I guess, but the fact that I'm not being impacted directly isn't ever remotely germane to my beef. I see an incremental erosion in our individual liberties- the War on Terror made it possible for Big Government to get a little bigger, and to do so without a watchdog on hand. People bitched about being branded as 'anti-patriotic' for their stance on the war in Iraq. Now we have senators and news agencies promulgating a baseline assumption that our domestic terrorists are people who disagree with the health care vote.

Did anyone else catch that for the first few hours after the failed Times Square bombing that we were supposed to be on the lookout for a 40-something white guy? Accusations were flying that it was someone who was opposed to the president's agenda.

Whoops, it was just another muslim, doing what they do here lately, blowing up New York. Again.

Now we've given the state (well, one state, so far) the ability to hold someone on suspicion of being an illegal immigrant. YEAH, that's not going to be abused, is it. Even Scott Brown, the Great White Hope of Assachusetts, is getting in on the action: He's co-sponsored a bill to 'revoke' the citizenship of people suspected of being musli... uh, I mean, a terrorist.

Look, I want a minimum blast distance between me and the nearest muslim as much as the next guy, but let's assume for a minute that some of them might NOT be terrorists. We're going to REVOKE YOUR CITIZENSHIP based on suspicion that you're associated with bad people... Yeah, that's not going to be abused. Fuck due process, anyhow. The US constitution? Suggestions. The whole due process thing is such a drag, anyhow.

Anyhow, courtesy of the current political crew, we now have a bill that would make it illegal to be suspected of doing something illegal.

You're under arrest for thoughtcri... uh, suspicion of storing Pressure Treated Lumber within 100 yards of a wetland... 20 years ago, when you bought a swing set for your kids. We know, we saw a picture. That looks like PT, Ahmed.

I'll tell you what happens: someone gets arrested for his association with a homeless man in NY city whose cousin's uncles's sister's former roommate went to a "Footloose" showing at a midnight movie in which a woman in a burka was busted for bringing a bag of Mike and Ike's that she bought at a Tedeschi's on her way to the theatre.
And then WHAM! Kevin Bacon is headed for Guantanamo, or, if he's lucky, gets his citizenship revoked and heads back to Great Britain, where his family was from 350 years ago.
Posted by Paul, Dammit! at 1:13 AM