Well, it was a hell of a trip.

I got to sail on a tugboat from NY to Philadelphia, a 27-hour voyage, and I got a little bit of everything in the experience.

I'm not a tugboater. I've spent a grand total of 3 weeks on tugboats in my life. 1 week on an elderly ship assist tug about 12 years ago, and 2 weeks on a tug moving oil barges, of which there was only 2-3 jobs done, in daylight, none of which required moving more than 4 miles.

So, yeah, I'm not experienced. I came from ships. Different world. I have been on barges that were towed, so the experience of seeing everything from the tugboat's perspective was really neat.
Essentially, the HQ was moved to Philadelphia to cover for another barge that went into shipyard. So this is supposedly a temporary move, God willing. The tug that towed the HQ is run by a good friend, and a boat I'm familiar with, and perhaps more importantly, with a crew who actually like me, and who I like, so it was an enjoyable ride.

The weather was gorgeous. Once we were on the tow wire, hove short, things settled down.

When we got out of Ambrose Channel, the approach to NY harbor that runs to the south of NY harbor, and into deeper water, the tow wire was stretched out to somewhere around 1300 feet, as a fairly large swell was coming in from the east. The motion was interesting. We were rolling pretty good, but every now and again there was a resistance, which I guess was from the tow. It wasn't snatching at the tug, which can happen when the tow and tug are out of sync and the tension on the tow wire gets tight enough to restrain the natural motion of the tug. At any rate, I stayed in the wheelhouse on the captain's watch, catching up with my friend and enjoying the cool air and seeing the stars a little bit- I haven't seen much dark sky between living in south FL and working in NY, and I wasn't seeing much, but it was more than I'd seen in some time.
The swell was not enjoyable. I'll say that. I wasn't nauseous, but the AB and the engineer certainly were. I was uncomfortable. The captain and mate were deeply content, in their element.
I went to sleep around midnight, and for the first time in 11 years, I had to stuff a life jacket under one side of the mattress to wedge myself into the bunk and the bulkhead so I wouldn't roll over if I dozed and wake myself up. It's not a very comfortable way to sleep, but I could doze here and there. I've never really been great at sleeping in a swell. I get by. Somewhere around 4am we turned, however, and started taking the swell on the quarter, and then the motion settled down and I got a nice hour's sleep before waking up at 5. Watch change was 0530, and it gave me time to wake up and clear out of the room, as my bunk was in the mate's room, and he would be going to bed at 6.
I came out to a very different ocean. Conditions were glorious. The swell was a bare 3 feet maybe. When I went up to the wheelhouse, I arrived before sunrise to calmer seas and an absolutely beautiful morning.


Now I remember why I do what I do. I need these moments, and one sunrise like that has always taken away 20 bad days. It's been a long, long time since I got to wake up to that feeling.

The rest of the morning passed rapidly. 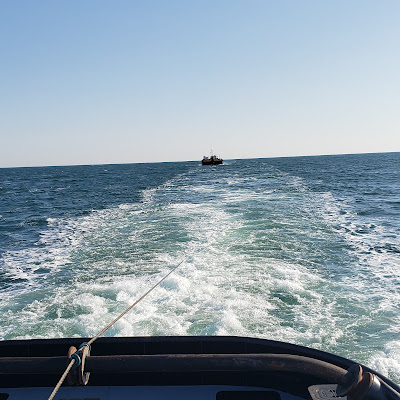 Too rapidly, really. After noon, I slept another 2 1/2 hours. We were starting to sail up the Delaware river, but I was pretty beat after 2 long days between not sleeping in the swell and making the HQ ready for sea prior to that. The captain and mate shortened tow at several points, until after a good dinner we made up alongside the tug and the deckhands and I climbed aboard the HQ and unlashed the mooring lines and such.
Now, I felt an odd anxiety on leaving the HQ. It felt like a betrayal to shut down the generators and dog the hatches down the day before, and it felt good to fire them back up and open up the house. The deckhands helped me unlash and generally get the HQ ready to dock when the time came, and then headed back aboard the tug while I soaked up the feeling of being back home. 3 hours later, we were docking at company HQ in Philly, and my 2nd man was waiting on the dock, having flown in earlier.

Saying goodbye and thank you to the tug crew was fine, and they needed an hour or two to make ready to head right back to NY light boat (not towing). My 2nd man came on and helped me pull the towing gear back up on deck, which took a lot longer than it should have as I'm badly out of practice. Once that was done, we got him and his stuff moved back in, and since we haven't seen each other for a few weeks, he clued me in on conditions in the real world with the COVID virus. That's another story, and one most people know more about than I, as I've been aboard for the past few weeks.

I dumped my clothes and went to bed, slept like a dead man for 6 hours and was up at 0500 again. Tonight I'll go to bed early and hopefully get a good sleep.

A good story and a great sunrise!

Welcome to the South River [ The Delaware ].