July 7: The Empire Strikes Back

It's been a good couple of days here at the HQ. We spent July 4 at a lay berth in Brooklyn, at the foot of the Brooklyn Bridge- next door to Brooklyn Bridge Park, in fact. We went ashore to have lunch, got some groceries, and generally had a bit of a holiday, which is unusual for us, but also was welcome. Neither B nor I are fans of New York on any level, so there's no special treat for us, beyond the food, since EVERYTHING is available here, and probably within walking distance of any given part, too.
The lay berth has a nice view of the Manhattan skyline, which is cool I guess, but after seeing it a few times, meh. We had a great view of the Brooklyn bridge, too, which is actually cool, as something about the design of that bridge has always been visually very appealing for me. As luck would have it, we were also right in sight of the fireworks barges for the night, too.

The July 4 fireworks were AMAZING, and we had million-dollar seats.  Photos don't do it justice, as my camera minimizes the view, making things look further away than they really are. But wow. I actually took video of the fireworks, and everyone knows that everyone hates being shown video of fireworks. I'll spare you that, anyhow.
A couple of our tugboats tied off to us for the duration, so we got to yell back and forth a bit, do some visiting, too. It was actually kind of nice to do all this sober.

Yeah, that picture doesn't look like we were right across the channel, but we were. Easy swimming distance for me 10 years ago. Maybe 3/4 mile?

The fireworks show was insanely good. Loud, bright, and well-timed and paced- there were few breaks in the action longer than 1-2 seconds. 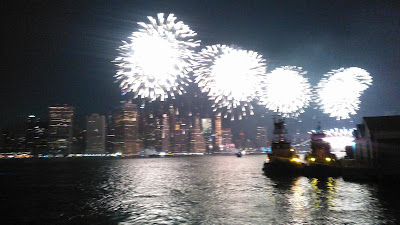 One of my friends is captain on the outside tugboat, the one who blocked my view slightly, but we managed. Plus, I'm used to it. He's the only person I've met out here whose head is larger than mine so this is in keeping. At least we weren't at the movies I guess.

Anoyhow, it was a great day to celebrate American Independence from Great Britain.

Today, however, it's a different story. Today, July 7, the British have their revenge, at least on yours truly. Today we have to bunker the ocean liner QUEEN MARY II.


The QM2 is the most difficult ship I've ever had to bunker in 10+ years of bunkering. It's just a cast iron whore from start to finish. Thank God the crew are professional and nice.

From what I've been told, she's gorgeous inside and sails like a dream. Outside, though, they forgot to put any way for other vessels to get alongside to give them their goddamn fuel.

So, in about 90 minutes, we'll sail to go get them that fuel, probably put a fresh dent among the thousands already there, and I'll get fussed at by the crotchety old captain who our dispatcher assigned as our tug. Normally I can call and ask for a tug crewed by people I know I get along with and work with well for this one particular ship, as it IS known to be a battle, and there's a bit of a safety dance to be done, and better to do it with people with whom I have a history of working well together. BUT, I didn't, as I don't want to be a nag and get a rep as a whiner, plus I have a good rapport with our more senior dispatchers, and I don't want to strain that by trying to get my way every damn day.
I am not looking forward to this morning, anyhow. We'll be fine, it'll go well I'm sure. And Queen Mary can look up from hell where she's roasting for what she helped do to Ireland, and she'll smile at how her namesake made one of those descendants have a shitty morning, ending a great couple of days.

What makes the QM2 so difficult to bunker ? To an amateur eye , she doesn't appear to be shaped much differently from othe large cruise ships .

They didn't put any attachment points for anything to come alongside and get fast. So we have to take their bow lines, fall back, catch their stern lines, come ahead, and then have them heave their lines in until we get into position, all with the screaming current of Buttermilk channel. I mean, I complain about it as it's a bear to coordinate, and their lines get AWFUL heavy when they're out 500 feet, but out tug has it worse- they've got to keep us alongside-ish the whole while. If we have a great tug operator, it's usually OK. Yesterday's tug was a giant question mark. Good handler, just doesn't communicate. Worked out well, though in the end.

Thanks for the info !

Strange , though , that the marine architects who designed her forgot the attachment points . You would think that something so basic would be one of the first things to enter into a hull design .

Sort of like GM designing a car without a means to refill the gas tank !