When I started working on ships, we didn't even get a paid ticket home until we had completed 90 days of our voyage. Standard trip length was 120 days. Everyone had their up and down days, where the trip seemed to be moving along briskly or just dragging on to death.

These days, working in brown water, I don't get that sort of extreme. Patience is inversely proportional to convenience. Where before we'd all gather on the poop in ports and places where we could get a cell phone signal and catch up with people at home, today we are in touch about 95% of the time here at the HQ.  New York harbor has a dead cell zone in the middle, strangely enough, but only during the day. I don't know why that is, but at our mooring buoy, we can't really get a call through, and email is super-spotty, even though we're within a mile or so of Staten Island, Manhattan AND Brooklyn, where, what, 10+ million people live? Dead zone.

Being offshore away from cell phones and the mundane cares of the world used to not be a bad thing. Today it is emphatically bad, because it is temporary and we are connected, and expected to be reachable. I get pissed off when I can't call home, and my wife gets pissed off when she expects to be able to talk to me and can't.  It isn't like when we were first married, and I'd tell her I'd call in 3 days when we passed Miami, maybe, or in a week or two otherwise. With the expected gap, life was set up such that that was just the way it is. You'd think that having just a daylight blackout on the phone at one anchorage would be a callback to that time, but no, you'd be wrong. It's horribly inconvenient. Times change, I guess. I'd be amenable to losing my cell signal for offshore sailing again. I'm sure I could set up the infrastructure of my life accordingly... but you know, I really like saying goodnight to my wife and kid every night. It's not as good as being there, but it helps.

So, we developed a hydraulic leak in the cargo crane that needed some attention. Turns out, the swivel fitting that allows our hydraulic hoses to well, swivel, has taken an early retirement. So, a simple 360-degree swing of the crane got us back to where we need to be, and we can address the swivel when it hasn't been raining 17 of the last 20 days, with no end in sight. Since we use an environmentally less-harmful light oil, containing a fair bit of vegetable oil, cleanup was a matter of mopping up, splashing a couple of gallons of mineral spirits, wiping down, and then bombing the deck spots with toluene and rags. So, a few hours on hands and knees, and it won't even leave a sheen.  'Not one drop on deck' used to be our watchword on the tanker I worked on, and I do try to follow that today. 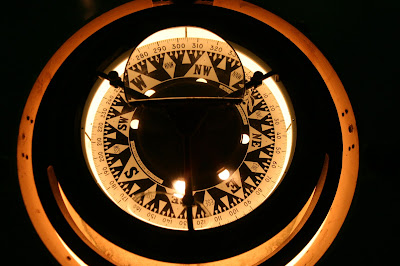 At any rate, I'll be home in 2 weeks. I don't have a lot of fun projects set up this time. Mostly I'm just going to decompress, see where things take me. I might make some sawdust and glue my fingers together here and there, hopefully, but I don't have the relish for that  after too much time away from my family. I mostly just want to see everyone.