back to the oil mines

In 1997, those were the first words said to me in the town of John O'Groats, in Scotland, where I was visiting for the first time.It's a quiet place. Desolate, to the outsider. 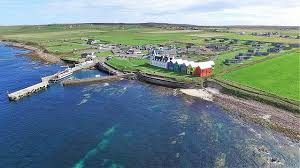 I only spent a few days there- unlike most of Scotland, I just couldn't find a companionable group of people to hang out with in my travels, and the local pub was closed, it being Easter weekend. Couldn't find a fishing boat to work on either, which I did (for free or for pay) a few times in the 6 months it took for me to work my way up and down the coasts. So it goes. Other than being kicked out of the city of Inverness for disturbing the peace (I got punched in the back of the head while taking a leak in the men's room of a bar, beat the bag off the kid who did it, whose friends then proceeded to return the favor with interest), I never felt unwelcome as I did in John O'Groats... and it wasn't as though I was unwelcome so much as a feeling that nothing was quite right at the moment. I ended up meeting some great friends at my next stop, and made some money fishing and drinking my way into the Hebrides. But I always remember the man I passed as I got off the bus from Thurso (or was it Wick? Can't remember).   You see, it would have been discourteous for him to have not recognized me if we'd met before, so he was being safe... I immediately returned the greeting with an "I am, and I hope you're well, sir."  "Ach, aye, the cold and all but good." And that was it.

So, flying back into New York after a super busy two weeks at home,  I didn't feel like I was supposed to be here... not in a bad sense, just an uneasy feeling that my head wasn't in the zone, you know? And it wasn't. It took a few hours on board the HQ before I felt like I knew what was going on, to get my head in the game. The Uncanny Valley feeling did pass, eventually.

Selling the B family home has turned into a stressful, gigantic pain in the balls for the whole fam. Someone always wants something, whether it's paying the local fire department a ridiculous sum for coming down and testing the fucking smoke alarms and giving me a certificate that they work (seriously, this is a thing in Massachusetts. Jesus Christ), or one thing and another, every day for the first 10 days at home required between 1-3 hours of phone calls, emails and getting the right people the right information... not to mention my poor brother and sister, who live nearby and have to stop what they're doing to deal with things I can't do over the phone. It's been a shit show, and the disturbing thing is that by Massachusetts standards, its going smoothly.

I did get plenty of time with my wife and kid, and that was awesome. I had to work at not letting my annoyances become distracting enough to take away from our good times, but I think I did ok, absent a few hiccups.

I even got a 2 full days and a couple of half days in my garage, which I spent expanding my workbench (it's now 15 feet long) installing the Radio control gear in my little model tugboat, and building the not-really little new model boat, too. 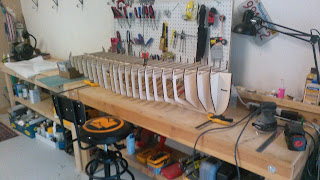 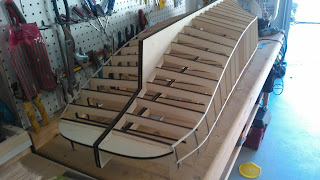 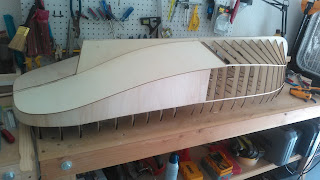 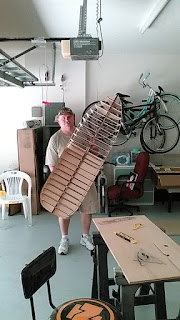