Being Nice to Other Sailors

I've learned through experience that it pays to be nice when working with foreign ships and foreign sailors.

Quite often, we see the crew of foreign ships as being of lesser competence and not particularly good sailors in general, and while sometimes this may be the case, it's often enough an oversimplification of sometimes complex factors affecting our interactions; one thing remains clear, however: when working with foreign ships, being nice generally pays off. 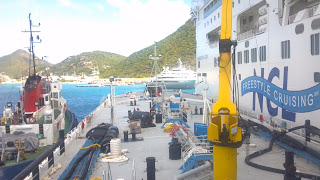 When I first started bunkering, I was shocked at how awful most ships were in terms of professionalism among their crew, when bunkering. We'd have to come alongside and blow the whistle, holler, fuss on the VHF, and hit the hull of a ship with a sledgehammer to get their attention. In all the years I was on a tanker, not once did a bunker barge, bunker tanker, water barge or lightering vessel get alongside of us without an AB to meet them, heaving line in hand, and a length of heavy rope thrown over the manifold to show exactly where they needed to line up to send their hose up to us to connect. Not. One. Time. did another vessel touch up to us without us being there.

Foreign ships visiting the US, it's a different story. Maybe one time in twenty does an AB run outside trying to meet us while we're already alongside.
It was frustrating. The rest of the world just doesn't operate on the same wavelength, but it's a mistake to conflate that with being unprofessional. They just don't give a shit.

In the intervening years, after yelling myself hoarse at men standing often far overhead to hurry up, lift a line, throw down a heaving line, etc. etc, I just don't see it as neccessary, and eventually, I realized that for the most part, it's not helpful either. Generally, I rarely got aggressive or rude anyhow, so me yelling at some poor foreigner was generally a reactive event anyhow. As I've matured, I've come to view it as a mark of professionalism, anyhow. If I can respond to idiocy calmly or at a minimum with an aggravated tone, things tend do go more smoothly.
Also, being shitty to an AB who is standing with a monkey's fist 50 feet over your head is a great way to get a concussion. Just saying.I've had to dive out of the way of a fastball thrown directly at me a few times after yelling at someone who wasn't moving fast enough to suit me.
I've been on the other end as well. I once bet my watch partner $5 that I could knock the hard hat off a particularly mouthy tankerman when I was AB on the tanker SS MONSEIGNEUR. I dropped that rude coonass like a felled tree. Didn't knock his hardhat off, though. Turns out it had a chinstrap. Still, it kept him from getting concussed, and he ended up with just some road rash on his ear and cheek. They had great nonskid on that barge's deck.
My attitude grew out of pragmatism. While I was somewhat mindful of trying to be professional early on, coming to grips with the idea that fostering a gestalt of smooth operating on board meant integrating all these concepts of professionalism, calm, efficiency and speed without being laissez-faire about getting the job done right frigging quickly took a bit of time.

Last week we were coming alongside a tanker out in NY's Stapleton anchorage in the dark, and the tugboat deckhand who was with me was pretty gung-ho, especially as he's an older guy. A real square peg, though, as the guys's something of a donkey. At any rate, after we get the first line up and get us lined up with the ship at a point where my crane will reach his manifold, things usually run pretty smoothly. The deckhand kept being slightly rude and ordering the ships' AB's around, however, so I had to say "(Name), quit antagonizing the AB's. I have to work with them for the rest of the day." That was enough for things to settle down quickly... and it also meant I might not get some teeth knocked out by the monkey's fist, either. 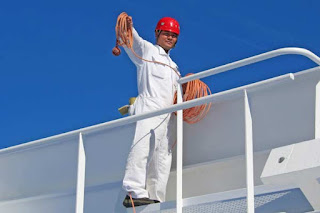 Generally, unlicensed crewmen on foreign ships are grumpy Eastern Europeans, timid Lascars or gregarious Filipinos. It's a bit of stereotyping to class them like that, but it's often enough the truth, viewed through my own cultural lenses, anyhow. Each ethnic group comes with caveats in terms of working well together across a language barrier. The bohunks, you have to be fast, quiet and direct. Lascars, you need to address the officers, not the crew, who will not break wind without a signed JHA and an officer's permission. Filipinos, you call them 'amigo' and 'my friend,' say please and thank you, and they'll absolutely do their best to do as you ask while laughing and talking... and while writing about these things is absolutely not PC, it's often enough the best way to get the job done safe and fast.

I often think about what these ships' crews must think of us. I often enough find that our tugboat deckhands are rarely professional or cordial to ships' crews, especially, and this is not kind to say, those people who don't work here in NY harbor full-time. More than anything else, I tend to get defensive about our operation. I have to work with these guys. The tugboat deckhands emphatically do not. When we are all fast, they go back aboard their tug and leave. I get to live with the aftermath if they've been shitty to the ships' crew. If they piss off the bosun and I don't put a lid on it, the bosun will see to it that the flange on my cargo hose, for instance, might not be bolted down as tight as it could be, so when I lay it down on our deck at the end of a job, I'll come back out a few hours later and find a 2-foot diameter puddle of cold black oil on my deck, or maybe stick a rag in my cargo hose, which will clog one of our two pumps when it gets shoved into a tank the next time we load and discharge. These days I'm VERY quick to put a clamp on a tugboat deckhand who gets a case of the ass and tries to take it out on the people I need to establish a relationship with over the course of the next hours. Ultimately, it's my job to do exactly that... and that pisses me off more than a ships' crewman being a dick. Having a stranger come up on my deck and poison the well I'm going to be drinking from is extremely disrespectful to me AND to the ships' crew.
I'm no angel; I've said some pretty rotten things to guys when I've lost my temper. I try not to, and beyond blowing up when things get truly unprofessional on the ships' part, I don't start fights with the people who are our customers. It makes my company look bad, and any sort of unprofessional behavior on our part usually gets met with the same, or worse, gets met with polite silence because the people getting yelled at can't respond because they're ordered not to by their own officers. There's just no angle in attacking a man who can't respond, simply because you're frustrated. Now, I'll meet rudeness with rudeness, and with gusto, across the barriers of culture and language. I speak pidgin english. It's how my wife and I communicated until we learned each others' languages when we were dating. I can make it known you're being a shit in almost any language.

When I work over, on someone else's boat or barge, it makes me sad to see how rude some of my friends and shipmates can be. It's not pervasive, thankfully, but it's more common than it should be. It makes me mindful of whether or not I'm guilty of the same thing, and how awful it looks from up on the deck of a ship when the bunkermen down below are being vulgar or rude.
"Man, that's guy's a real asshole." I've said that a few times to the mate on my ship when I was an AB. "Have the deck cadet piss in a can, and pour it over the eyes of the  bunker barge's mooring lines. He doesn't wear gloves."

Being nice avoids all that. Sailors being sailors, debts get squared one way or the other. The only way to win is not to play.

Applies the world over. Offend the dock guys (as a trucker), they're hourly and have all day, hope you're not in a hurry.

Don't be a dick should be tattooed on some folks.