Well, I'm back where I'm supposed to be- after a week of babysitting a strange bunker barge, I returned at 3am to my own floating abode, and it was very nice. 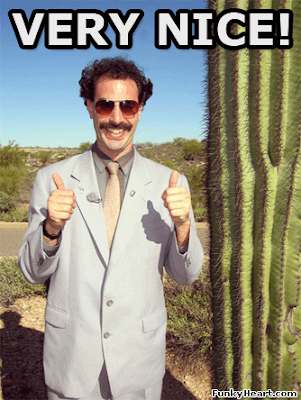 Anyhow, I had to shower, change and wash every bit of clothing in my sea bag, as I was on a smoking barge, and everything, literally everything in my possession stunk of smoke. How bad was it? I ate some leftover M&M's that were in my computer bag (why, what's in your computer bag?). They tasted like they were rolled through an ashtray. I even had to wash my seabag.
Anyhow, it was so nice to sit in my chair and just soak in the peace and familiar atmosphere, that I spent a content 90 minutes in my office chair while my laundry laundered. At the end, I read a book and enjoyed a little down time, as we're down for maintenance.

Now, in my week aboard the other bunker barge, things were pretty quiet- it's always an adjustment getting used to the organization and office setup of a bunch of strangers, and as such it made me very mindful of how well we've got things organized under mine own watchful eyes.

Anyhow, it wasn't all marlboro-stink and unfamiliar surroundings in the past week. We did some work too, which I'm happy to share with you. 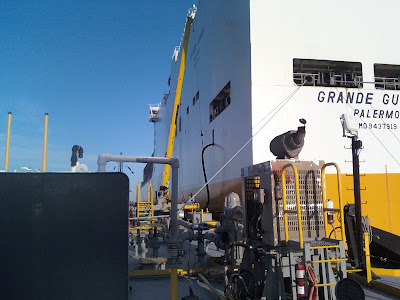 I've written several times about bad ship design for bunkering, and I usually use this class of ship as an example. You see the bunkering hatch way he hell up there on the side of the hull of this combination RoRo/container ship- where it's impossible for the crew to see what's going on on my deck, and where I can't see what's going on on theirs. Plus, the bunkering port is way the hell aft on the ship, astern of the aft end of the parallel midbody, leaving what is technically known as 'fuck all' places to lay a barge securely alongside. 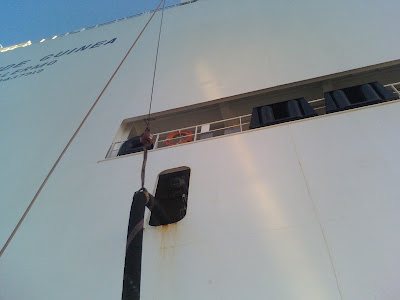 Here's another shot of the bunker hatch. I have no idea what's going on up there. If they sprung a leak or siphoned off fuel, or merely performed a voodoo ritual up there, I would be completely unaware. 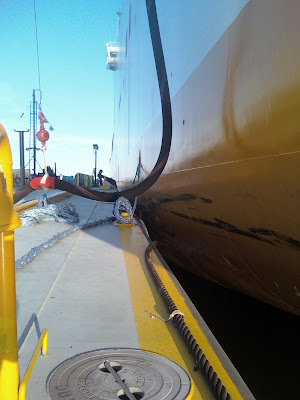 This picture was taken midships on my barge, looking forward. You can see that we had to throw a single fender between our hull and his, and then sling the mooring lines in such a way as to winch the bow and stern into place- sort of a tethered teeter-totter style. With only three potential mooring points, finding a safe way to moor alongside this ship is challenging. Also, look at the collection of dings and scrapes on the ship's hull. We're not the only ones who had issues getting alongside. This is a newer ship, yet the shell plating looks like she's been roughed up. 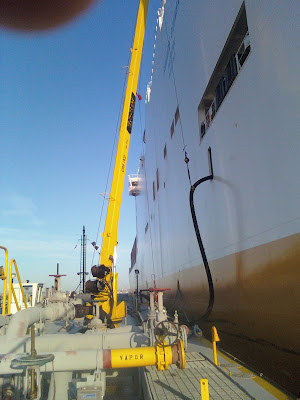 This, hopefully, gives you a better idea- see the growing gap between the vessels as you look aft? The only way to make this possible as a safe mooring is to run a 3-part bowline to a winch, making the bowlines scream under tension, then do the same at the stern before running spring lines midship- this means that the tug captain has to make the barge 'hover' without running fore and aft in order to maintain position- for about 10 minutes. This is a herculean task, and completely unfair to the guy at the wheel, who has to try to keep the barge in position without letting the stern slip under the stern of the ship. 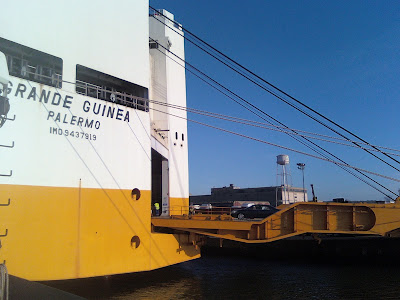 And this is simply a gratuitous picture of the stern ramp- this ship was taking used cars 'to a farm upstate' just like my dog as a kid. Maybe they'll even be police cars.