Is there anything worse... 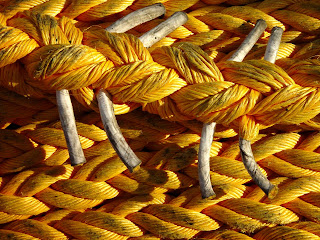 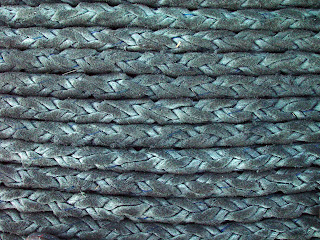 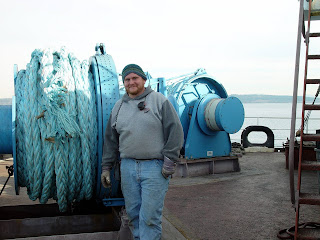 ...than having a bit of thread from a mooring line get under your glasses and lodged firmly into your eye? I'm having flashbacks to my days on a ship, where I could put on safety glasses, goggles and a face shield, and still have to fish bits of rust out of my eyes at the end of a needle-gunning session.

One very good shipmate, who passed away just last year (in his own bed, which is about all a sailor can ask for, I guess) used to be my go-to guy when something got in my eyes that I couldn't fish out myself. The first time he assisted me, after showing me the pinhead-sized bit of rust, he said (with an unforgettable Honduran accent) "Yes, but heem feel like a elephant." Now,when the occasion comes for me to pick out a bit of plastic lint, I always think of that moment, sitting under the flourescent lights in misery, with a male, non-family member waaaaay inside my 3-foot bubble.
Did the job, though.

One thing that did surprise me, when I was an Ordinary Seaman, was the decent variety of non over-the-counter remedies that were available in a time of need. Excluding the narcotic variety, which is none of anyone's business, there is also a good selection of ointments and unguents available to provide a decent level of first aid and palliative care.
My eyes being a magnet for foreign objects, I got very good at fishing stuff out of 'em. Every now and again, though, I'd get something stuck in the surface of my eye that didn't migrate out to the orbital membranes (the 'edge' of your eyes), and, since it's not possible to not flinch at a swab being passed over your pupil or irises, it was time for some serious help. We had an opthamological anaesthetic available that would 100% numb the eye, and I got to the point where I could swab a foreign object off of my own eyes in under a minute. Three times in 7 years I had this happen. I even kept a tube of antibiotic in my bag (from my own doctor) to provide aftercare.

What makes me want to hit myself in the head sometimes is the level of passive resistance I used to display regarding the wearing of eye protection on deck. When the mate on my ship began to really push the crew to wear eye protection 100% of the time on the cargo deck (and not just when chipping rust), I should have been the poster boy for that effort... instead I groaned and grumbled as much or more than the next guy. Stupid of me, really, though I did have my reasons. Safety glasses cost $1.99 a pair (the ones we used did, anyhow) at the tool supply shop near my house, but my employer sent only enough glasses to ensure that everyone had a pair. After a week of casual use, they were damn near impossible to see through, and I would get blinding headaches after about 30 minutes with a pair of shitty glasses. Asking for more was no problem... the limited supply was the problem, and I'm not kidding. Though my former employer tried very hard to create a safety culture, money was an issue. My ship used to receive the same number of gloves for a month's use (for 21-24 crew) that I receive now for 3 tankermen. My current employer is quick to remind us that once a glove no longer protects one from exposure to oil, they're actively keeping you exposed, and need to be disposed of ASAP.
Now, if you'll exuse me, my Visene is calling. I look like I have hay fever.
Posted by Paul, Dammit! at 5:10 PM

Labels: eye magnets, torture, whose grundle is this?

dude, my eyes are watering just reading that - if I get a lash in my eye my whole day is ruined.