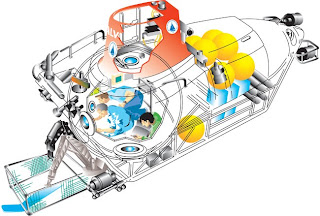 I've been geeking out here at Hawsepiper's floating HQ since I read that my dad's old sub, the ALVIN has been undergoing an upgrade to expand her capabilities. You can read about it here.


It seems smart that if the groups that are pushing to increase the sub's maximum dive depth another 2,000 meters are going to put the effort in, that finally, after 40 years, they are going to put a seat in there for the pilot. The box the pilot sits on, currently, is apparently called 'the hemorrhoid factory'


The Alvin has come a long way in 40 years- her capabilities have increased dramatically, and her max dive depth has tripled. All the same, the most memorable and dramatic job of her career happened early on, when the Alvin was used to recover a lost nuclear weapon. On March 17 1966, Alvin was used to locate a submerged 1.45-megaton hydrogen bomb lost in an aircraft accident. My dad was there. His recollection of the events was mostly focused on refitting ALVIN with a juryrigged 'basket on a stick' fitted to her hydraulic manipulators, rather than on the political and military dog-and-pony show.
Still, I'm having another one of those moments where I wish I was still working down in Woods Hole. I never did work on a grant large enough to afford (or need, sadly) time on ALVIN.
Posted by Paul, Dammit! at 8:07 PM

Your Dad helped find the big beem off Palomares? I'll bet he had a few stories....

Interesting.I have seen a Nove Special about Alvin's Replacement.