I think that half the reason I chose the University was because of the Field Station.

Being the youngest of four kids, by the time I finished high school, I knew that there wasn't going to be enough money for college for me. I'm smart enough that I could have pushed myself and gotten a free ride to any non-ivy league school I chose... but I was also unfocused and running in a million different directions. I didn't know if I wanted to join the Navy, be a lobstermen, become a marine engineer, or be a scientist. So, after high school, I pumped gas, and worked on a lobster boat... and it was fun, but not for long. After a year, I had one of those moments where I realized that I didn't have to pick one job and forget about the rest. I chose to enter a Marine Science program, something that would give me the ability to study all the sciences, and focus on the aspects that I found interesting.
= For the first time since grade school, I was an A student. I was still pumping gas two nights a week, and Saturday was my day to go lobstering. In the summer, peak lobster season (at least for a college student), I was working up in Maine, along the Canadian border, up in the Bay of Fundy, and that's where I learned how to be a marine biologist.
My first summer up at the remote field station mostly consisted of washing dishes, cleaning bathrooms, mowing, clearing paths in the woods, and painting. In between, I sat in with the upperclassmen, who were studying marine biology and learning how to identify animals in the field. I was in heaven.
So, my second summer up in Maine, I was as happy as a pig in shit. I was taking a field class, and, with no dishes to wash, I started to tinker with the animal storage tanks- I had learned how to lay fiberglass, so I repaired a very large but leaky tank (about 6 metric tons), and proceeded to fill it with every marine creature I could find.
My lobsters kept eating the sea urchins, and my sea urchins kept eating the base of the kelp, and the kelp leftovers clogged the drains in the tank, so I had seawater flooding the wet laboratory about three times a week.
I really got interested in sea urchins. Lobsters have always been my bread and butter, and, while I find them interesting scientifically, I was fascinated with sea urchins. 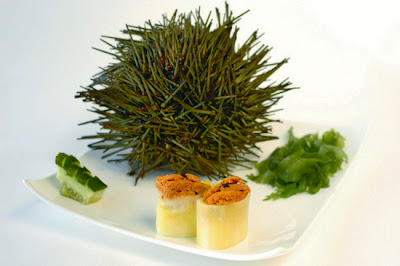 At the time I was up in Maine, the sea urchin fishery had exploded. Urchins were in high demand for their eggs, or roe, for sushi. Downeast Maine is for the most part economically depressed, so the 'green gold' immediately came under heavy pressure. My freshman year, I had helped a friend perform a population assessment, and, in the local urchin habitats, there were over 100 urchins per square meter of seafloor.
By the next summer, I performed my own population assessment, and I found less than one urchin per meter in the same areas, but without all the hungry urchins, there was a kelp forest growing where the seafloor had previously been barren. I was completely sucked in by the changes to the ecology.
There was a small muddy bay not far from this new kelp forest- the bay contained a massive population of small urchins. This area, called an 'urchin barrens,' was something of a desert, ecologically speaking. There was just enough activity to keep the large population of urchins present, but the lack of food, coupled with the massive population, left them stunted, and, thus, avoided by fishermen, who were looking for heavy, fat, egg-laden urchins.
Being sympathetic to the locals severe economic woes, and generally being a fan of commercial fishing, I hated to see the urchin fishery curtailed, as it obviously was coming to an end. And then I had one of those 'ah-ha!' moments.
I very quickly whipped up a very short and simple study proposal: I would try to associate urchin reproductive potential with seafloor type: Since fishermen wanted nothing to do with urchin barrens, and urchin barrens contained massive populations of urchins, and urchins are dependent on density to ensure reproductive success (that is, the more urchins there are in an area, the more they successfully breed), the barrens could be urchin nurseries, despite the near-starvation conditions, and fishermen could harvest the living hell out of urchins outside the barrens and not deplete the population... at least in this part of Maine.

Well, turns out I was right. I spent the next YEAR writing and rewriting a report of sufficient quality for publication. My academic advisor, in this manner, taught me how to write scientifically, over the course of 25+ revisions. Anyhow, 14 months later, we published our first article in a small journal.
My second article, produced a year later, was published in the most prestigious journal of marine biology. I discovered that lobsters use differing neurological input to find food by smell, based on the properties of chaotic turbulence of diffusion of chemicals in water, and not by the concentration of the chemical odors, as was previously believed.
I wrote that article in one take, in under two hours. That's the impact of a good teacher.
Anyhow, I got addicted to writing and then reporting on my findings. Scientific fora are good places to network, and I got to know some great people- I actually met with E.O. Wilson, perhaps the greatest evolutionary scientist since Charles Darwin himself (we talked about the evolution of the sea urchins' jaw, the most complex mandible in nature, with its' 19 moving parts). I also, quite by accident, had lunch at the Harvard Club with a quiet, unassuming astrophysicist, who also accidentally invented the digital camera, and not-so-accidentally designed the Hubble telescope (he paid, obviously).
I've never been able to focus on being any one thing. The more I got invested in marine sciences, the more important lobstering, and my other new passion, fish farming, became to me... and the problem with being pretty good in a couple of fields is that it doesn't leave enough time to focus passionately and become excellent in one field. I had spent part of my last year as an undergraduate in Scotland, writing an economic analysis of the impact of globalization of the salmon farming industry, and the 300-page monster that came out of it was an abortion, scientifically speaking, mixing economics and sociobiology.
Like anything, when things get out of balance, something has to suffer. By the time I was in grad school, I was driving 100 miles every weekend so I could go home and go lobstering. My first summer in grad school, I had helped test an experimental fish farm down in Florida, and learned that lobstering was more important to me than fish farming, but that I enjoyed both. I was starting to want to go fishing more than I wanted to do anything else, and I knew that it was time to give something up. It was time to either be a researcher or be a lobsterman, and I chose to be a lobsterman...for a few years, anyhow, until my perennial case of itchy feet pushed me into working on an oil tanker.
Posted by Paul, Dammit! at 6:25 AM

Why do I feel like there's more to this story.

Now this sounds like stories I'd hear from you over a couple of pitchers! Keep on keepin' on Fish!