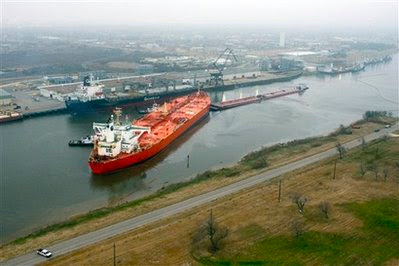 On Sunday morning, there was a nasty oil spill (11,000 barrels of crude oil) in the Sabine Neches river in Texas, in the Beaumont/Port Awful, er... Port Arthur area.

How to put this nicely? Port Awful, as I call it, is to Texas what the Paris sewers are to Paris. How's that?

That being said, one thing I like about Texas, aside from the people (the only truly good thing about the place- nice folks as a rule), is the can-do attitude of government there regarding resource extraction. Generally speaking, the attitude there is that people come first. Given that the principal value of the 2nd largest state in the US is the liquid that lies in salt-domes under the soil, one could argue that environmental policy in Texas is partially to blame for the blighted appearance of the place...
...But one would be wrong. Coastal Texas is not so attractive, for the most part... Flat and sere, which, to a person from New England is the antithesis of natural beauty. Not to say that it doesn't have its' attractions. I just haven't seen any of them, and I come from a green, somewhat hilly place. Flat alkali land just doesn't float my boat.

Anyhow, had this spill occurred in Washington state, California, Massachusetts or Delaware, the captain of the ship would be in Guantanamo bay by now, and the tug-and-barge unit operator would be undergoing therapeutic crucifixion while awaiting trial. 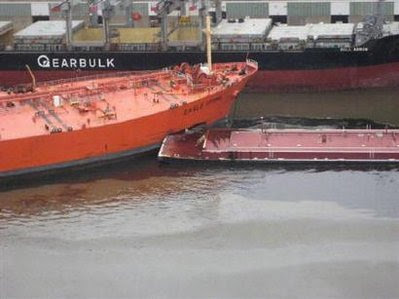 Texas is all about the oil, and, as such, is accommodating to a point regarding the odd oops. That being said, I've witnessed firsthand a governmental representative chewing a new ass into a ships' representative after an avoidable accident, too... deep in the heart of Houston (which, incidentally, also smells and looks like a midden heap, but is the critical port for American oil import. Trade-offs.),

No, my true point is that reality seems to rule in Texas. And this is where I make my prediction for what's to come: 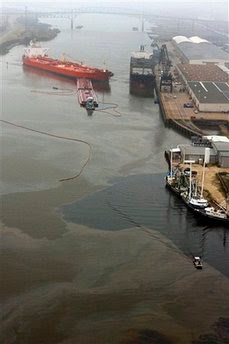 My alter ego, Nostradumbass, predicts that this ugly and major oil spill will be handled in a businesslike fashion, and that no one will be going to jail for a year or two to await the potential future passing of some sort of law which they can then be charged with breaking retroactively.
Someone is going to get it in the seat, however; I predict that the odds of the responsible party, or most culpable contributing party getting the smack down (at some level) to approach 100%.

All jokes about the ugliness aside, the people involved in this mess stand a better chance of receiving fair treatment in Texas than in anywhere else in the US, and that's shameful to say.

...and then, if history serves as a guide, after all that, the US coast guard's administrative law pogrom... er, I mean, PROGRAM, has to find someone to throw under the bus.

Well at least the "driver" that caused this should be thrown under the bus.

Hi,
Like your blog some interesting stuff, i have a blog to do with the building of Ships/Tugs etc in the old yard that used to be open in Scotland you are welcome to visit at http://leithbuiltships.blogspot.com
Thanks, will visit again.
The Loftsman